In this 12-part series, I look at what makes each facility unique, and recount some of the key moments and stats* in the Pac-12 Era. We continue in this third installment with Arizona State’s Desert Financial Arena. 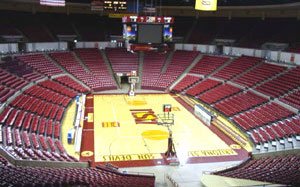 Colloquially referred to as “The Bank,” the Desert Financial Arena has been the setting for several historic victories, garnering a nationally respected basketball brand for Arizona State.

The win over No. 1 Kansas in 2018 was arguably the most historic victory in program history. It sealed the school’s reputation as a nonconference powerhouse that is capable of taking down the giants of the college basketball world. The only other Pac-12 teams with a home victory over the No. 1 team in the country since 2011-12 are UCLA and California.

The Sun Devil faithful have had the privilege of watching their team take the floor as the No. 3 team in the nation in 2017, a level that only Arizona and UCLA have attained in the Pac-12 Era. With additional Top 10 victories over No. 2 Arizona in 2014 and No. 6 Arizona in 2016, Arizona State’s accomplishments at the Bank are arguably unmatched in the Conference of Champions.

The 7-4 mark as a ranked team is respectable, but the 7-9 record against the Top 25 when unranked is emblematic of the rise of Sun Devil basketball. Upset victories create recruiting momentum, and Bobby Hurley has capitalized on his program’s accomplishments. With incoming 5-Star freshman and projected lottery pick Josh Christopher, combined with the return of Remy Martin and Alonzo Verge Jr., the Sun Devils are a strong pick to win their first-ever Pac-12 Regular Season title in 2020-21.

The arena has been the site of just two matchups between Top 25 teams, and ASU has split those games. The 2018 victory over No. 1 Kansas came when the Sun Devils were ranked No. 18, and the lone defeat came in 2017 at the hands of No. 17 Arizona when Arizona State was ranked No. 25.

USC and Oregon State have not won a game in the building since 2011-12, and only Oregon and Washington are above .500. Somewhat surprisingly, Utah is 4-4 and has as many wins as Stanford and Colorado combined.

Perhaps most importantly, the Sun Devils are 5-4 against arch-rival Arizona.

With nonconference victories over No. 18 Texas A&M, No. 25 Marquette, and solid wins over San Diego State, UNLV, and Georgia, the arena is deadly for teams outside the Conference of Champions.

Still, the unfathomable loss to Princeton in 2018 can’t be overlooked. Nor can the 28 conference losses, including the 2-5 mark against Washington.

However, a substantial portion of the defeats in the arena were prior to the national emergence of the program over the past few seasons. Going forward, the Bank figures to be one of the Conference’s most difficult environments from which to emerge victorious.