In this 12-part series, I look at what makes each facility unique, and recount some of the key moments and stats* in the Pac-12 Era. We continue with the CU Events Center. 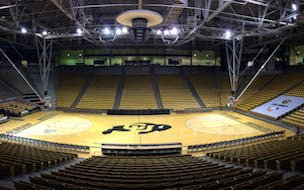 Nestled in the Colorado Rockies, the CU Events Center presents a formidable challenge for all opposing teams that enter its confines. Sitting at nearly a mile in elevation, the raucous environment provides an elite home-court advantage that matches or exceeds the best the Conference of Champions has to offer.

Not many programs in the Pac-12 have such natural advantages combined with a hostile environment. The dangerous combination creates a unique experience that most teams have difficulty overcoming.

Since the Conference expanded in 2011, the Ducks have failed to win in Boulder, going 0-7 during the period. UO squads ranked No. 4, No. 9, and No. 10 have all come away empty-handed. In fact, the Ducks have never won a game at CU. Ever.

Only UCLA has a winning record at the arena during the Pac-12 Era.

The Bruins have managed to post a 4-3 mark, and have more wins at the CU Events Center than Stanford, Arizona State, Washington State, Oregon, and California combined.

Surprisingly, the CU Events Center has witnessed just one game featuring two ranked opponents. In 2014, No. 10 Oregon was downed by No. 20 Colorado led by Spencer Dinwiddie and Askia Booker.

When ranked, the Buffs have lost only three games at home, but have upset a Top 25 team nine times when unranked. And while reaching as high as No. 18, the home crowd has yet to see a Top 10 Buffs squad take the floor.

At the same time, the Colorado faithful have been humbled on three occasions by dominant performances from Arizona and Utah. But the double-digit defeat to San Diego in 2017 might have been the most painful.

Still, the arena remains one of the toughest in the Pac-12.

With the return of McKinley Wright IV and a strong recruiting class, CU projects to continue its dominance in Boulder during the 2020-21 season.

Record of Pac-12 Teams at the CU Events Center

Up Next: ASU’s Desert Financial Arena