In this 12-part series, I look at what makes each facility unique, and recount some of the key moments and stats* in the Pac-12 Era. We continue in this sixth installment with UCLA’s Pauley Pavilion. 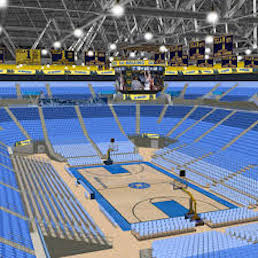 Pauley Pavilion has been a tale of two arenas for the Bruins in the Pac-12 Era.

Sprinkle in a victory over No. 1 Kentucky in between, and you’re ready to join the UCLA fan club. Prepare for a bumpy ride.

Sandwiched between the shocking nonconference defeats and victories sits a consistent characteristic: dominance in conference play. The Bruins have a winning record against every team in the Pac-12, and only Oregon and USC have more than two wins at Pauley.

That’s a remarkable trait for a program with double-digit defeats on its home court to the likes of Liberty and Hofstra.

In reality, those shocking losses came during transitional periods when the program was either on the brink of firing its coach or at the very start of a new era.

The nonconference peak was the victory over No. 1 Kentucky in 2015. The upset win came during the height of the Alford Era, a brief five and a half year period that produced three Sweet 16’s and a Pac-12 Tournament Championship.

During the Lonzo Ball season in 2016-17, the Bruins took the floor as the No. 2 team in the nation. Only Arizona has achieved that height since 2011-12, a distinguishing mark that sets the program above the rest of the Conference of Champions.

Though consistent turnover has plagued the head coach, the constant remains strong recruiting classes and NBA-level talent. That strength has created the 34-4 record as a ranked program, and the 6-4 mark against the Top 25 when unranked.

The building has witnessed three games between two ranked opponents, with UCLA going 1-2 in those contests. The single victory came in 2017 when the No. 10 Bruins were battling No. 5 Oregon led by Dillon Brooks. Ball’s instant-classic dagger three with 32 seconds remaining sealed the game, securing UCLA’s best conference win of the Era.

And while the seven wins against the Top 25 are a solid indication of the Bruins’ success, the 11 defeats in nonconference are indicative of the underlying struggles the program has faced since 2011-12.

Fortunately for the University and the Pac-12 as a whole, Mick Cronin appears poised to eclipse the success of the Alford Era and return the Bruins to consistent national relevancy in the new decade.