In this 12-part series, I look at what makes each facility unique, and recount some of the key moments and stats* in the Pac-12 Era. We continue in this fifth installment with USC’s Galen Center. 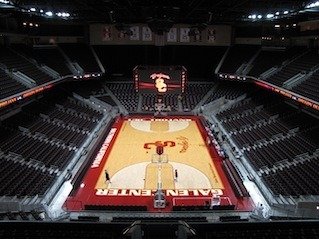 The Galen Center hasn’t been too kind to the Trojans during the Pac-12 Era. Over the nine years since the Conference expanded, USC has yet to break 100 wins in the building.

The absence of signature victories during the nonconference season has arguably prevented the program from receiving more invitations to the NCAA Tournament.

And while the two bids to the Big Dance are nothing to scoff at, the Trojans must improve at the Galen Center to become a perennial dancer.

Perhaps the final home game of the 2019-20 season is an indication of things to come in the new decade. UCLA entered the arena with a chance for a share of the Pac-12 Regular Season title, but a last-second three from Jonah Matthews sealed a Trojan win to deny the Bruins.

Andy Enfield needs that mojo to continue into 2020-21 with five-star McDonald’s All-American Evan Mobley poised to fill the shoes of Onyeka Okongwu. Enfield may also rely heavily on sophomore guard Ethan Anderson to facilitate the offense with the departure of Matthews to graduation and several guards to the transfer portal.

Conference play has been somewhat more favorable to Enfield’s squads over the years. Only Oregon, UCLA, Colorado, and Utah have winning records in the building. And USC has posted respectable wins over No. 7 Arizona in 2016, No. 8 UCLA in 2017, and No. 11 Arizona in 2013.

The Trojans have taken the court as the No. 10 team in the nation in 2017, a Top 10 ranking that is rare among the schools in the Conference of Champions since 2011-12. USC is a notable 6-2 when ranked, but have lost the only game featuring a bout between two Top 25 teams.

The 16-point defeat to No. 16 Texas A&M in 2017, as well as the 3-12 mark against ranked opponents, is indicative of the Trojans’ struggles in the arena. The shocking losses to Army, Portland State, and Cal Poly San Luis Obispo don’t help either.

But the history in the building hasn’t stopped Enfield from recruiting at one of the highest levels in the Pac-12. Last season, Okongwu was arguably the best player in the Conference, and this year Mobley projects to similarly measure up.

On top of that, the victories over ranked Arizona and UCLA squads since 2016 should be taken into account when viewing the Trojan program’s development since the start of the Era. The recent back-to-back appearances in the NCAA Tournament in 2016 and 2017, along with the likely return in 2020 had the tournament been played, should give hope to the Trojan faithful.

At minimum, things are trending in the right direction for USC Basketball.

Record of Pac-12 Teams at the Galen Center