What recourse would Cal have if Under Amour succeeds in backing out of its apparel deal? Did the school screw up, or is the company just looking for a way to save money?

More than likely, Cal will follow what UCLA is doing and will likely file a breach of contract lawsuit against Under Armour (UCLA recently filed a $280 million lawsuit against the apparel company).

In the UCLA deal, Under Armour attempted to use the force majeure clause, indicating that because of the global pandemic, which was not anticipated, Under Armour cannot afford to continue with the contract with UCLA. We believe that Under Armour is using the same argument against Cal to cancel the agreement.

Of course, we are not privy to the actual contracts, so this is a bit of guess work, but we have read that Cal did not have a long-term contract with Under Amour, like UCLA did, but relied upon term sheets over the past four years, which expire.

We do not know how long the terms sheets were between Cal and Under Armour. We believe that Cal will likely follow suit and file a breach of contract claim against the struggling sports apparel firm.

If some Big Ten football parents were to sue like they’ve been threatening to do, would medical evidence be relevant, or does the Conference have the absolute right to shut down the season?

Last week, eight University of Nebraska football players did file a lawsuit against the Big Ten. In the lawsuit, they ask for less than $75,000 in damages, and specifically allege tortious interference of business relations and breach of contract.

The main crux of the lawsuit centers around the Big Ten’s lack of transparency in how it voted to cancel the season. It’ll be interesting to see how the lawsuit plays out.

We suspect that the Big Ten will use medical evidence to supports its decision to cancel the season. We also suspect that, despite public statements to the contrary from Minnesota, Michigan State and Penn State, the Big Ten did hold a vote to support the decision. And in fact that vote was made public on Sept. 1.

We suspect that one of the main reasons why the Nebraska players filed the lawsuit was to get the information out of the Big Ten to see if it is true that there was a vote held.

It has been interesting to see a few schools in the Big Ten be very vocal about the opposition to close the season—i.e., Nebraska, Ohio State. Ultimately, however, the schools are backing the Big Ten’s decisions.

The Big Ten schools grant the Conference the ultimate authority to decide whether to cancel the season. However, according to the bylaws, the Big Ten requires a 60% majority vote in order to take any actions in the Conference— such as canceling the season.

Lastly, it is interesting to hear the rumors that the Big Ten is already looking into restarting the season after Thanksgiving or in December. We’ll see how it all plays out.

Given the loss of Pac-12 revenue for football, will schools be allowed to cut corners on Title IX issues, or do you think the courts would hold them to the same pre-coronavirus standards?

The short answer is that Pac-12 schools will not be able to cut Title IX corners. Title IX is a federal law that requires that the scholarships (and other benefits) be equal between male and female collegiate sports athletes.

Rather, we believe that the NCAA could lower its requirement that schools have 16 varsity sports to compete at the Division 1 level. We anticipate that this will mean mass closures of collegiate sports programs, especially male programs, over the next few years.

Why don’t teams and athletes challenge NCAA eligibility decisions more often in court? So many of their decisions seem arbitrary and inconsistent, and they change their rules without revising previous rulings.

Accordingly, even if the student athlete were to file some type of an injunction in the court, asking the court to put a stay on the decision from the NCAA, ultimately the injunction would not be successful.

Why are college athletic teams allowed to kick athletes off a team after they’ve been charged, instead of having to wait until they’re found guilty?

Typically, if the student athlete has been accused of wrong doing, they are removed from all team activities but will not lose his/her scholarship right away. Many athletes in that situation will transfer to another school.

You can listen to the “AP & Spence” companion podcast to this column here, and read their bios here. 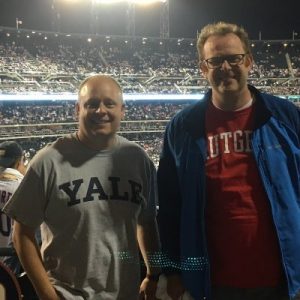 Latest posts by Spencer Kelly and Aaron Price (see all)